In establishing a re-usable code that will be suitable for use in all strategies to issue orders, determine which orders were executed and to implement logic to control strategy behavior, it will be useful to define and develop several concepts:

There is no feedback between order execution and a strategy to tell the strategy which of the currently active orders has just executed and resulted in a change in trade position.

One could attempt to determine the order that executed by observing the price of the most recent trade relative to various order limit and stop values.  However, there are numerous problems with this technique both to limit and stop orders, as outlined below:

When the price touches the limit price, it is not known if the order will be filled. Whether it fills or not will depend upon how many orders are ahead of the user’s order in the queue at the same limit price and what volume is being traded at this price.

One might think that stop orders would be easier to emulate within code but, in fact, this task is even more problematic. For example, if the current position is long and there is an active stop loss order at SellStopValue, then it could be reasoned that the stop would execute whenever the following condition was satisfied:

However, whether such an occurrence triggered the stop would depend upon what Order Entry Preferences the user had set for stop triggers.  The user may set a stop to trigger when any of the following circumstances are satisfied: 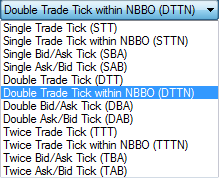 These options are offered in Order Entry Preferences for good reason.  There are situations where the correct selection of a stop trigger will insulate a trader from data problems, such as single bad tick, or from a single large trade in a thin market.

Fortunately, it is possible to accurately infer which active order was executed from an analysis of the change in Market Position, and a knowledge of which orders were active and at what price levels.  This method is more complicated but more accurate than attempting to rely on price analysis alone, as used in Method 1.  When the knowledge of which order was executed is required in order to direct the subsequent behavior of the strategy, market position analysis is the only method that will facilitate consist and reliable strategy logic behavior.

The following chart shows how the current Market Position (MP) and the Market Position of the prior tick (MP1) can be analyzed to determine which order was responsible for the position change:

The strategy must also be formatted for “Wait for an UROut confirmation before sending a subsequent entry order for the same signal to the market” to avoid having an order transmitted several times while waiting for a fill confirmation.

Users of earlier versions fo TradeStation may compile the code
from the text files included in the above *.zip file.